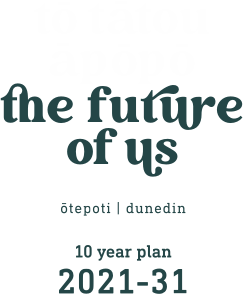 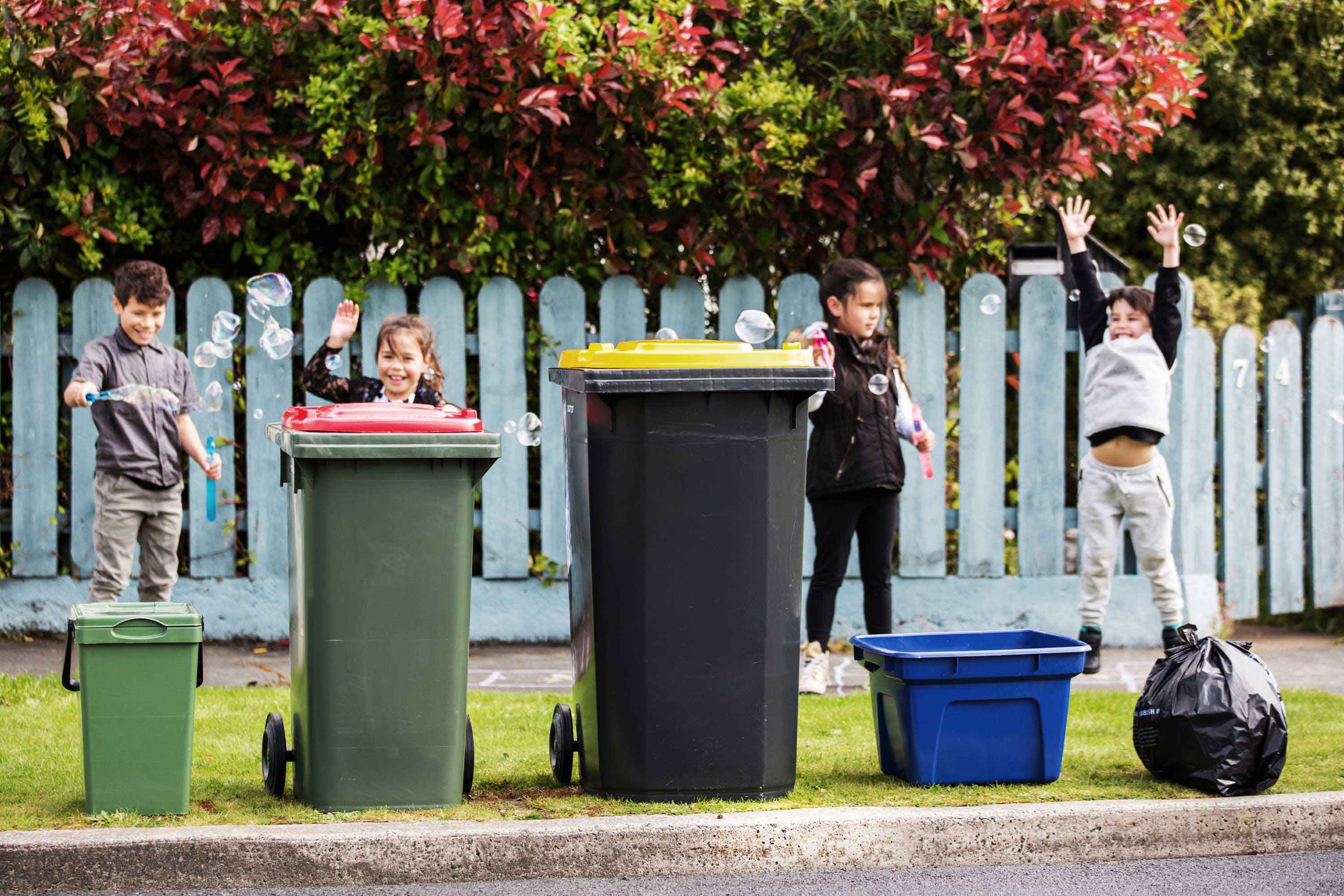 A key goal of the upgrade of George Street is to better represent mana whenua values in the streetscape and create an environment that more properly reflects the whakapapa of the area.

Mana whenua have been partners in the design, working closely with the Jasmax design team to imbue the design with specific features that reflect Kāi Tahu values, history and story-telling.

There are four key narratives incorporated into various design elements across the street:

Ōtepoti – references the corner of the four-cornered kete, which it’s believed was the origin of the Māori name for Dunedin. This narrative also seeks to establish a distinctly Ōtepoti/Dunedin sense of place.

Mātauraka – knowing mana whenua stories to gather an authentic and informed knowledge of the past.

Mahika kai – the practice of gathering and nurturing food and other important material resources.

Kaihaukai – the traditional practice of trade and exchange.

You can learn more about these narratives and how they have been incorporated into design features below.

The pavers are a bespoke design that has been developed specifically for Dunedin. The shape of the paver has been derived from the poti, or four-cornered kete.

The patterns used in the layout of the paving are also derived from Ōtākou Marae stained glass patterns, which represent important mahika kai. 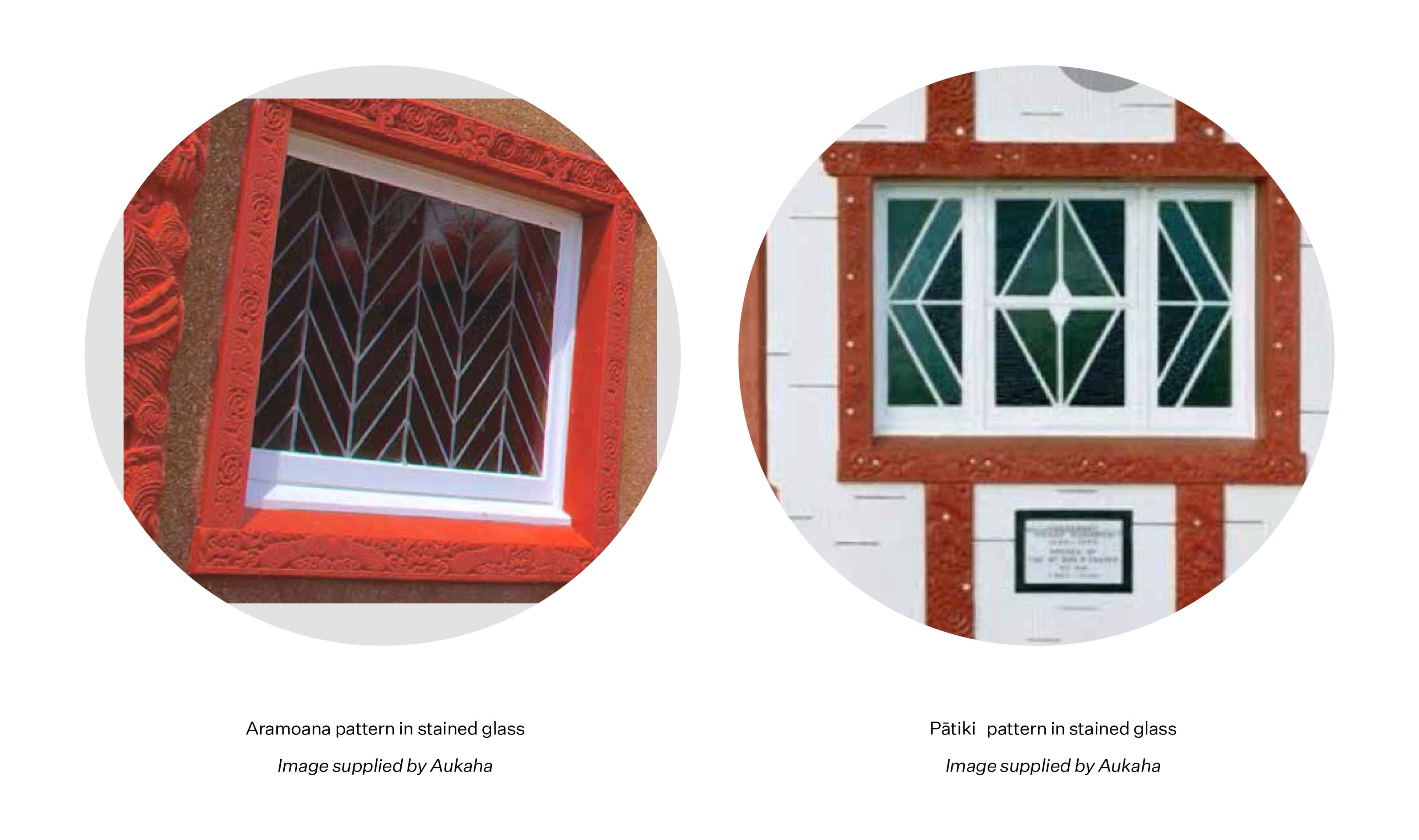 Used in the ground, these come together to represent the pātiki (flounder) and the ripples caused by its movement in the water.

In addition, the four-sided poti shape has driven the design of the precast concrete found along the street, which in turn influences the profile of planters and overall geometry of the planted areas. 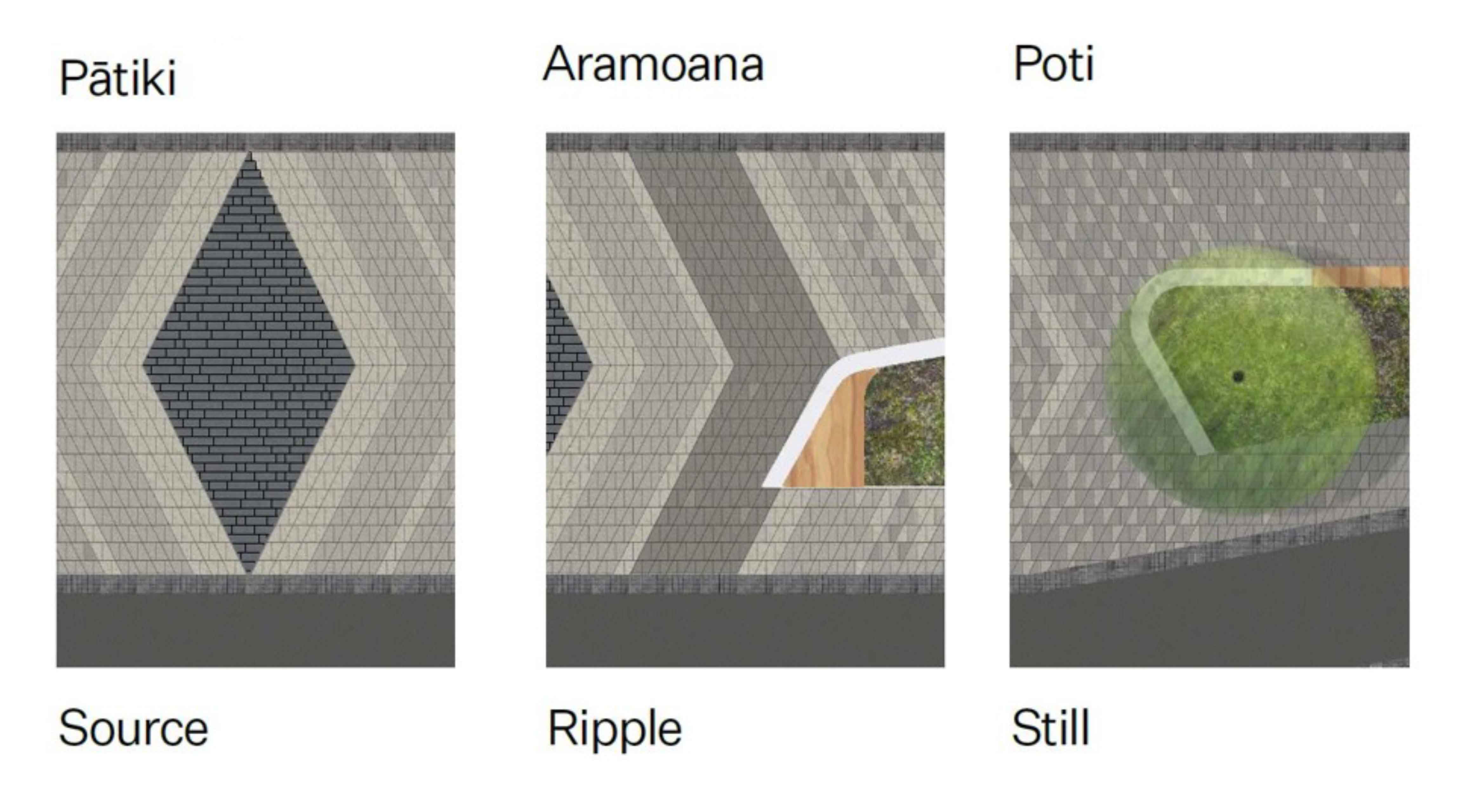 The colour palette has been developed to reflect the natural colours of key mahika kai species as well as providing the connection back to Ōtākou Marae. These colours have not only been used in the streetscape, but also in the marketing materials and items like the protective scrim (mesh) surrounding the construction site.

Fish caught in the Ōtākou Harbour were very important in the diet of mana whenua. Makā/Barracouta was one of the most important food species in its dried form was a key trade commodity in the 1830s during early European settlement.

The shimmering silvers of the fish and flashes of blue as it moves through the water provide inspiration for colour accents along the street. Silver is also incorporated through the use of stainless steel with subtle blues and pale silver whites representing the scales and upper spine of the fish. 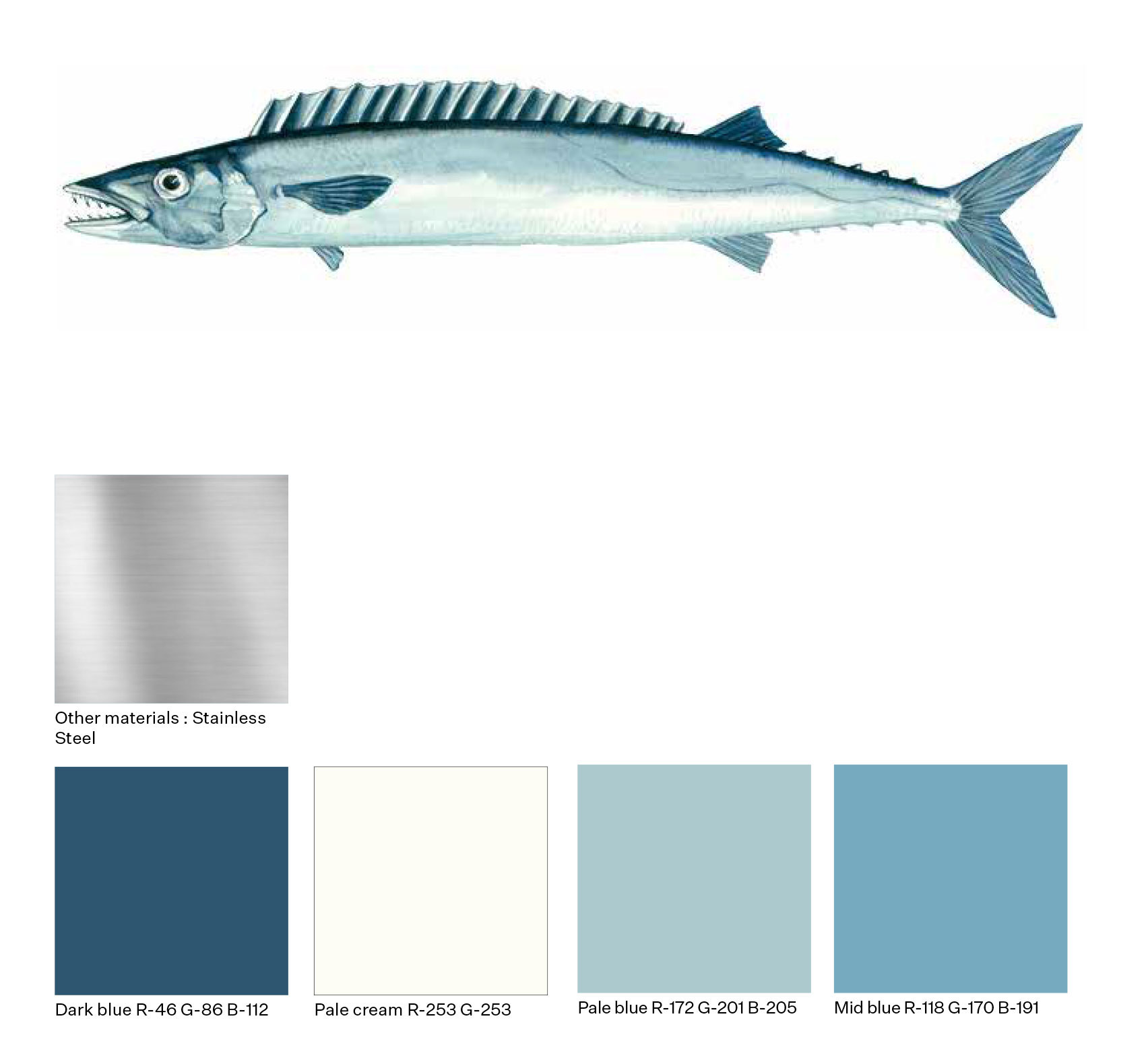 Kererū were also an important food source and were abundant around Ōtepoti.

The distinctive green hues of the Kererū along with splashes of pale purple and cream are reflective of the feathers of the bird and provide inspiration for colour accents along the street. 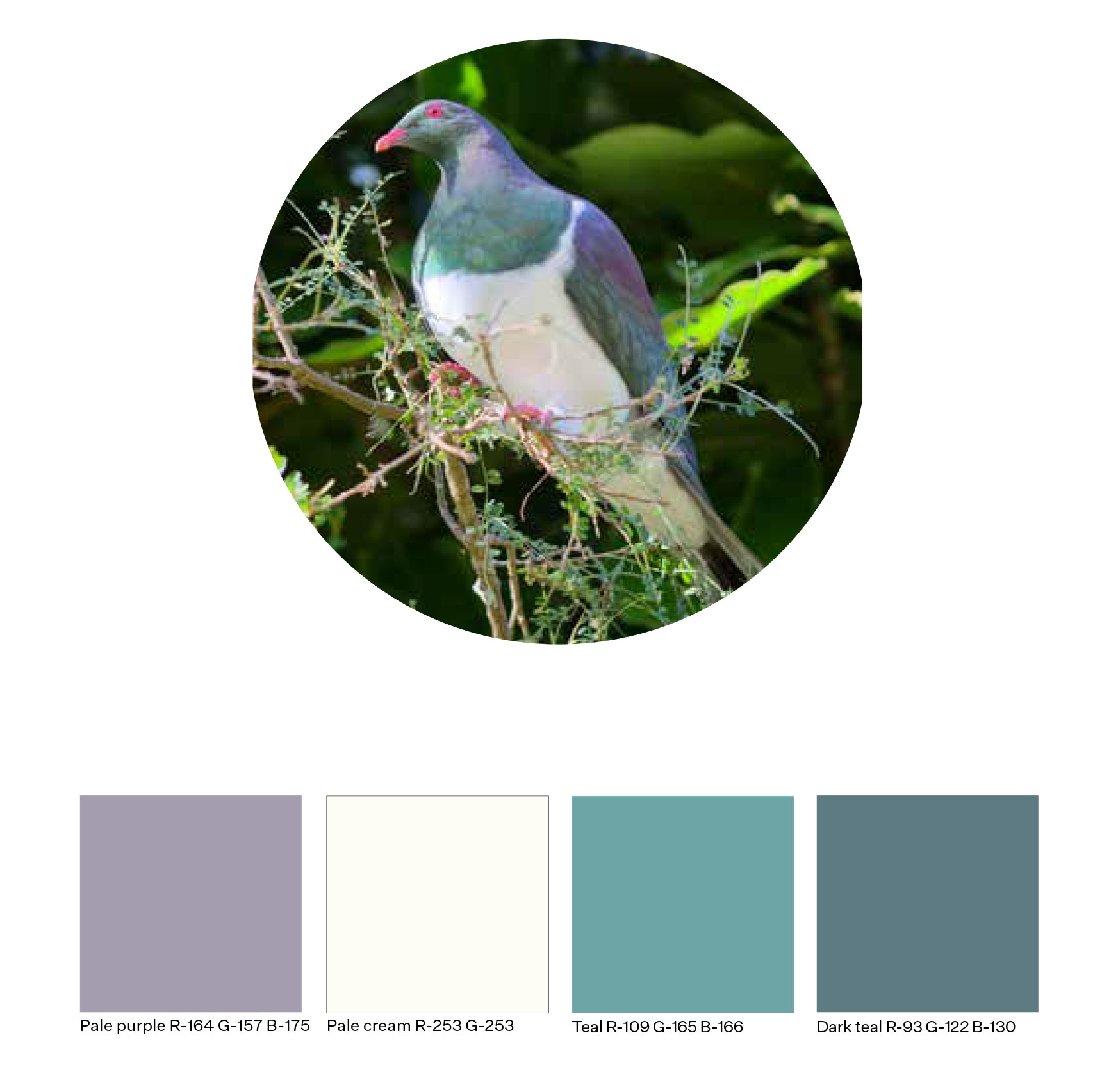 The red colour used at Ōtākou Marae has recently been developed into its own specific colour specification, known as Ōtākou Red.

Ōtākou Red is incorporated into the new urban street elements to provide a meaningful link between the Marae on the Peninsula with the central city. 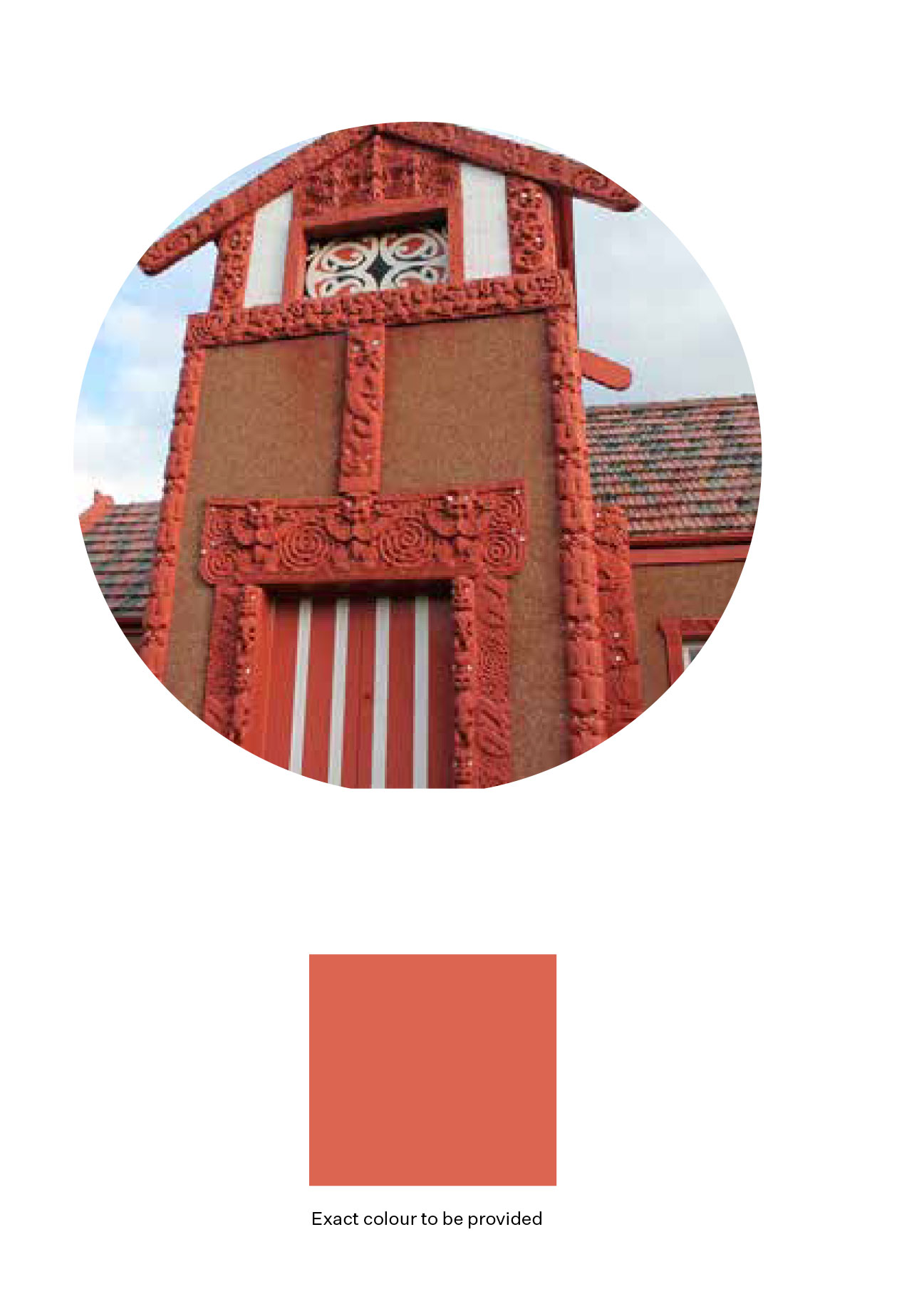 A map etched into the ground will be included in the Golden Block. This map tells the story of the pre-European shoreline, landmarks important to mana whenua, historic reclamation events within the harbour and the street grid of today. It acknowledges a Māori world view of the significance of landmarks and the ability to locate oneself within the wider context of the landscape. It also identifies original Te Reo Māori place names and helps people understand the history of place and changes to the landscape.

A number of quotes have been identified by mana whenua to be used along the street, etched into furniture and paving. These quotes reveal traditional concepts and knowledge and aim to inspire visitors to the street to think more about the history of George Street.

The quotes that are being included in the project are reproduced below:

"Let the salt water and the fresh be mixed together that it may be of one taste...."

"Let us show kindness one to the other, and good will grow out of it." Merekihereke Hape

This quote represents mātauraka gathered from Kaumatua in 1880, by H K Taiaroa

This quote represents mātauraka gathered from Kaumatua in 1880, by H K Taiaroa

In New Edinburgh Way, there is a large area that will play host to outdoor dining and street activity. This area has been referred to as the ‘Urban Lounge’ and will also see a host of Te Reo Māori kupu (words) etched into the bluestone paving alongside their English translations. The selected kupu are a list of many of the traditional species found in the local area that were important in terms of mahika kai. Showcasing these species also reinforces the narrative of kaihaukau where many of the identified species were important items for traditional trade and exchange.

Separately, quotes, excerpts of poems and prose from a number of Dunedin writers have been included in the same way, to highlight Dunedin’s rich literary history and status as a UNESCO Creative City of Literature. More information on these quotes can be found here.

Literature in the street

Throughout the project area, five locations for sculptural artworks have been identified. It is expected there will be a strong mana whenua component to some of these works.

A process is being developed to commission these works. The specifics of the commissions are yet to be determined including the artists, brief, and scope of works.

More detail will be available on these artworks in future.

Specific cultural designs are being included on the ends of furniture throughout the street.

Selected end plates will host a lasercut ‘mātaukaraeo’. This design has been gifted by a Kāi Tahu artist and represents traditional fishing hooks. These hooks utilised the vines of the highly versatile karaeo (supplejack Vine) that was abundant in the area. Karaeo has a multitude of mahika kai uses, with this design referencing the incredibly strong fibres being bound to secure the fishhooks to the fishing line.

A bespoke makā graphic has also been designed by a Kāi Tahu artist that will be sandblasted onto selected faces of the precast furniture elements that are placed along the street. This again reinforces the narrative about this important mahika kai resource.

On the light poles through the street, cultural designs and references are also being included by way of a graphic wrap on the poles. These have been designed by a Kāi Tahu artist. There are four different designs, based on the four main whaling stations of the region – Waikouaiti, Pūrākaunui , Moturata (Taiari Island) and Te Umukuri (Wellers Rock). Each design has the name of the whaling station along with a bespoke graphic.

Additional overhead lighting is included in the Golden Block and in New Edinburgh Way. The lighting will run as a string of lights between street lighting poles along a portion of each block and will be programmed to represent the movement of the makā along the street, further reinforcing the narrative of this important mahika kai resource.

A unique pātiki graphic has been designed by a Kāi Tahu artist that will be inserted into selected spotlights along the street. This design will be cast onto the ground during the evening and create a beautiful graphic after dark.

Plant species have been selected and evaluated against a range of criteria. There is a combination of native and exotic species that have been selected for suitability to this type of public realm environment where plant species need to not just look good across the seasons but be robust and perform ecosystem services such as assisting in water purification.

With regard to native plant species, there has been a specific focus on choosing species with mahika kai value.